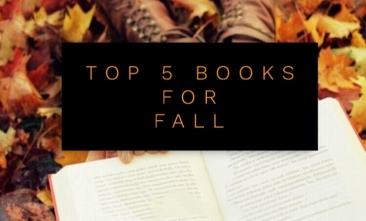 By now you know I love reading. There are some books that are perfect to read poolside or at the beach, basking in the hot sun on a summer day. Then there are other books that are perfect for those cool fall or winter days (or nights) where all you want to do is curl up under a blanket and read for hours. Well, living in Southern California, cold days are few and far between. And don’t even get me started about the lack of rain. Anyway, whenever we do get a cold day here, the first thoughts in my head are usually: time to cook something in the crock pot and read some books while dinner cooks itself! If you’re like me and this scenario sounds ideal, read on.

As soon as September starts, I know that October is right around the corner, meaning that it’s almost Halloween! Yay! It’s my absolute favorite holiday. I love the movies, decor, costumes, candy…you name it. Of course, I also love books that have a little extra fright factor to them.

Instead of scrolling through Amazon or walking the aisles of your local book store, I’ve put together a list of the top 5 fiction books you need to read now for fall.

Be sure to click each book’s pic to get more info!

The Dark Descent of Elizabeth Frankenstein by Kiersten White

When you hear Halloween, don’t you also hear Frankenstein?

Elizabeth Lavenza hasn’t had a proper meal in weeks. Her thin arms are covered with bruises from her “caregiver,” and she is on the verge of being thrown into the streets . . . until she is brought to the home of Victor Frankenstein, an unsmiling, solitary boy who has everything–except a friend.

Victor is her escape from misery. Elizabeth does everything she can to make herself indispensable–and it works. She is taken in by the Frankenstein family and rewarded with a warm bed, delicious food, and dresses of the finest silk. Soon she and Victor are inseparable.

But her new life comes at a price. As the years pass, Elizabeth’s survival depends on managing Victor’s dangerous temper and entertaining his every whim, no matter how depraved. Behind her blue eyes and sweet smile lies the calculating heart of a girl determined to stay alive no matter the cost . . . as the world she knows is consumed by darkness. (Click on the book to get additional info)

When a 200-year-old witch attacks her, sixteen-year-old bookworm Lainey Styles is determined to find a logical explanation. Even with the impossible staring her in the face, Lainey refuses to believe it until she finds a photograph linking the witch to her dead mother. After consulting a psychic, Lainey discovers that she, like her mother, is a Keeper: a witch with the exclusive ability to unlock and wield the Grimoire, a dangerous but powerful spell book. But there’s a problem. The Grimoire has been stolen by a malevolent warlock who is desperate for a spell locked inside it a spell that would allow him to siphon away the world s magic. With the help of her comic-book-loving best friend and an enigmatic but admittedly handsome street fighter, Lainey must leave her life of college prep and studying behind to prepare for the biggest test of all: stealing back the book. (Click on the book to get additional info)

Just released in October 2018, this sequel to Martin’s ‘Shadow Crown’ is available just in time for fall!

When a mission for murder goes awry, assassin Arden Eliri finds herself fleeing Trendalath, the one place she’s called home her entire life. Not only does she question her loyalty to King Tymond and his reign, but also her friendship with fellow Cruex member and confidante, Rydan Helstrom. The discovery of her newfound abilities—the very abilities her King had banned a decade ago—has left her in quite a predicament.Now a renegade assassin, Arden joins the Caldari, or those who practice magick, more commonly known as illusié. As she hones her skills up north under Queen Jareth’s watchful eye, King Tymond prepares for what will be the most stunning battle yet. The more Arden learns about Tymond’s past and the connection with her family, the more she craves vengeance on the very man who is hell-bent on destroying her.But there’s a darker force lurking in the lands of Aeridon – darker than King Tymond himself. Forced to endure what is bound to be an upheaval of life, love, and trust, it’ll be up to Arden—and her unwavering faith in illusié—to defeat it. (Click on the book to get additional info)

To be released in paperback October 2018!

Now Tobias is thrown into the Sovereign’s Tournament with nineteen other men, and each of them is fighting — and killing — for the chance to rule at The Savior’s side. Instantly his world is plagued with violence, treachery, and manipulation, revealing the hidden ugliness of his proud realm. And when his circumstances seem especially dire, he stumbles into an unexpected romance, one that opens him up to unimaginable dangers and darkness. (Click on the book to get additional info)

Harper Madison isn’t like other girls. She has extraordinary powers, but her inability to control them has gotten her kicked from so many foster homes she’s lost count. Shadowford Home for Girls is her last chance, and she hopes Peachville High will be the fresh start she needs.

At first, life appears to be looking up for Harper. She’s making new friends and is strangely drawn to the guy next door. But when evidence ties her to the gruesome murder of a Demons cheerleader, Harper discovers this small town has a big secret.

Beautiful Demons is a fast-paced YA novel with magic, mystery, and a touch of romance. This series will appeal to all ages, including fans of Pretty Little Liars, Hex Hall, and The Vampire Diaries. (Click on the book to get additional info)

Need more suggestions for a cold fall or winter evening? Check out some of my favorite things below:

Shop more of my closet on Poshmark

Came across this rad set of “spooky” pins and had to wonder why a book store is in this mix? Like how terrifying is Barnes and Noble really tho? I mean....😒#books #bookstore #pins #spooky #scary #writer #writersofinstagram
Sometimes certain #Halloween decorations really speak to me on a personal level 🎃📚 @michaelsstores #michaels #writer #writersofinstagram #wattpad #author #writerslife
Happy Labor Day weekend! I’m just over here waiting for Halloween...🎃
#mercuryretrograde #mercuryretrograde2019
It’s official! I’m now a @Wattpad Ambassador! 🎉 I’m so excited to be a part of this team and can’t wait to contribute 💕 #wattpad #ambassador #wattpadambassadors #bookstagram #books #writersofinstagram #amwriting #read #reading #book #fiction #yafiction #ya
@schittscreek